As mentioned in a previous blog here, Arkieva’s headquarters are located in Wilmington, Delaware, but it also has other offices worldwide. Arkieva started its European activities from Antwerp in March 1999.  The office is located in the Bredestraat 4.  The word Bredestraat means Broad Street and it was the Broad Street of Antwerp in medieval times.

Antwerp is the most populous city in Belgium with 513,570 residents in 2015.  It is linked to the North Sea by the river Scheldt. The port of Antwerp is the 3rd busiest container port in Europe and within the Top 20 worldwide. It is also the biggest (petro-)chemical cluster in Europe with most of the Top 10 biggest chemical producers in the world. With the recent construction of the biggest ethylene terminal in Europe by Ineos Oxide, Antwerp is THE hub for chemical feedstocks.

There are several stories explaining the origin of the name Antwerp.  According to folklore, a giant named Antigoon, who lived near the river, extracted a toll from a passing boatmen. When they refused to pay, Antigoon chopped off the boatman’s hand and threw it away.  This went on until Antigoon was killed by another giant, Brabo.  In turn he chopped off Antigoon’s hands and threw them in the river. “Hand werpen” is Dutch for “throw hand”.  However, the most likely explanation is that the name comes from the Dutch “an ‘t werp” which translates as “on the wharf “.  Antwerp is situated in the curve of the river, built on the sedimentation of that river. 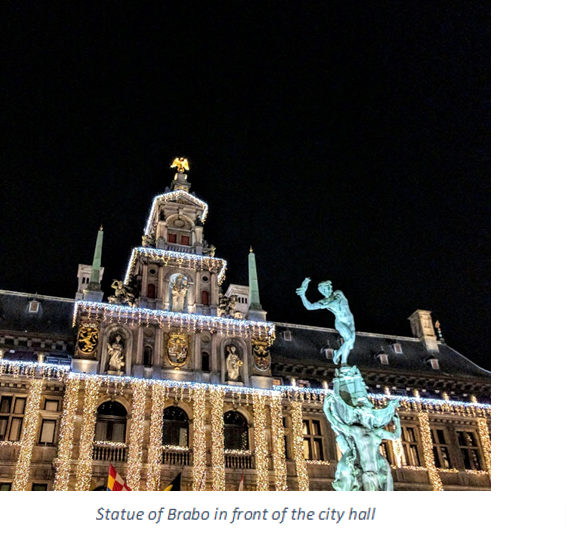 The inhabitants of Antwerp are nicknamed “sinjoren”, after the Spanish honorific señor, the Spanish noblemen that ruled the city in the 16th century. The French historian Fernand Braudel states that Antwerp was the center of the entire international economy and the richest city in Europe in the 16th century. The economy was mostly controlled by foreigners, which made the city very cosmopolitan with merchants and traders from all over Europe. Even today, Antwerp has more nationalities living within its borders than New York.  It was estimated the port of Antwerp was earning seven times more revenue than the Americas did for the Spanish crown. Antwerp has always been of strategic importance and was the scene of many wars and revolutions. Napoleon wanted to make Antwerp the finest harbor in Europe to counter the Port of London. At the end of the 2nd World War the Port of Antwerp was targeted for destruction because it was used by the allies to supply new materials. The city was heavily damaged, but the port survived the attacks.

Despite the heavy attacks, the city still shows its rich past and is flourishing.   It is the capital of cool, a melting pot of cultures.  It is the place to be for foodies, fashionistas, art lovers and diamond dealers.

The architecture and contrasts in Antwerp are dazzling. The impressive gothic Cathedral, the baroque Carolus Boromeus Church and the prestigious City Hall on the gorgeous 16th century market place, are the background of many Instagram pictures.  The first skyscraper in Europe was built here and many travel guides will tell you that the Antwerp train station is one of the most beautiful in the world.  The more recent MAS museum is featured in many “Top 10 places to visit”, as well. 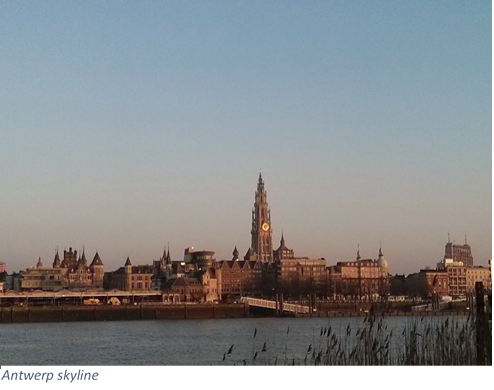 Thanks to the Antwerp Six, a group of world renown designers, the city is now an established location for fashion design and attracts a lot of international fashion lovers.  There are many trendy boutiques and shops that are important to the Antwerp economy.

Art lovers will be happy to know that the home city of baroque superstar painters Peter Paul Rubens and Anthony van Dijck, still has many of their masterpieces on display in several museums and churches.

Foodies and Belgian beer lovers will find Antwerp most enjoyable.  There are plenty of vibrant bars and restaurants.  The food is diverse and delicious, and the beers are just a heavenly match.  There are still 2 breweries in Antwerp.  The most famous one is De Koninck which is now categorized as an APA (Antwerp Pale Ale).

Another Antwerp icon is the diamond business.  For over five centuries, Antwerp has been the world’s number 1 diamond trading center.  84% of all rough diamonds and 50% of polished diamonds worldwide are bought and sold here.  In the Antwerp Jewish quarter, you find lots of little and bigger jewelry stores where you can buy something nice for the person you love.

This is just some information on one of the places Arkieva calls home. Antwerp, Belgium is a great place to work and call home. If you are looking for a place to visit I recommend it, Antwerp is nothing short of an experience to last a lifetime. What are your thoughts on Belgium and everything it has to offer? Have you ever been? What do you like most? Please, leave your thoughts below.

About the Author: Philip De Rop